10 lessons learned from a decade of building apps: Lesson 4 - Time is money 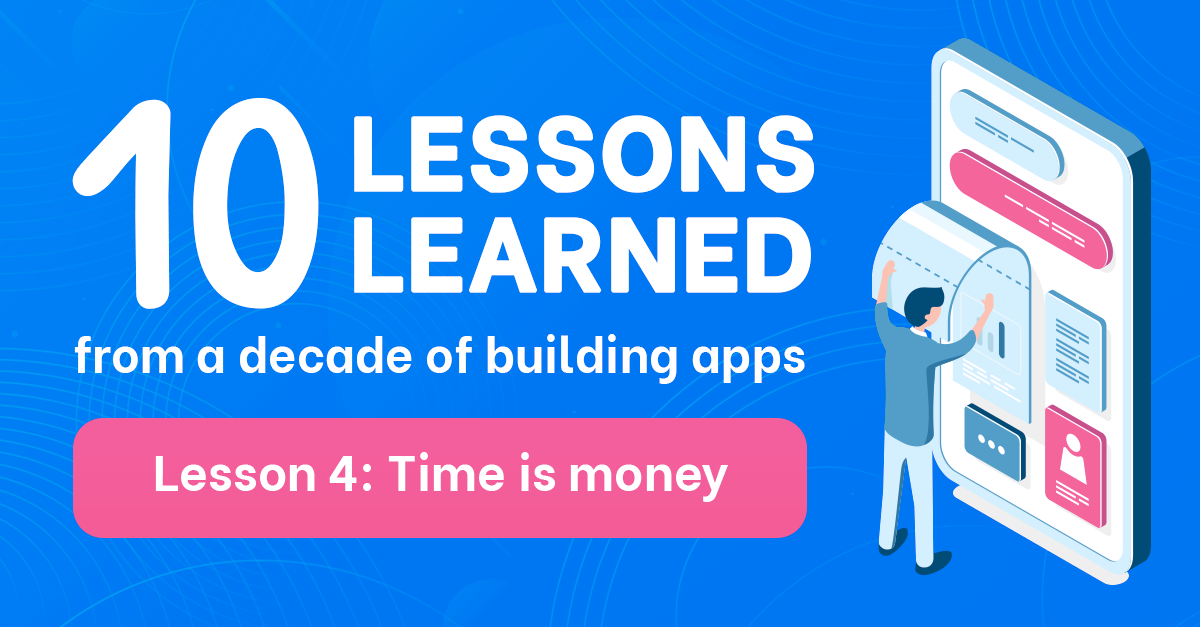 There’s an old saying, one which has particular pertinence in the creative industries: All work expands to fill the time available.

This is particularly true when it comes to app development.

However, in instances where you are relying on your app to make money, either because you want to use it to sell your product, to build up your customer base or to monetise your users in some other way, every day your app is in development is a day that you are losing money.

And that’s before you factor in the extra time for which you are paying developers and designers.

The flip side to this is that you want the app to be the best it possibly can be, so the last thing you want to do is to rush the app through to completion, just for the sake of having something for people to download. But this approach will rarely produce good results as you will end up with an app that has a poorly considered User Interface and User Experience, and you’ll find that you spend the app’s lifetime repairing faults with the overall design, constantly playing catchup. Also, any negative experience with your app is likely to be a one-off.

Nowadays, users are very quick to judge and if your app has a bug, or doesn’t give them what they want, when they want it, they’ll find something that does. And when they do, they won’t come back just because you’ve fixed the bug.

So how do you get an app into the marketplace quickly, without sacrificing the integrity of the finished product? Here are a few of the ways we’ve found to achieve this.

There’s a general rule of thumb that in most cases (not all) 80% of what you want your app to do can be achieved with 20% of the technology.

By focusing on that 20%, you can get an app to market that achieves nearly everything you want it to, and effectively too. Define your MVP early on and make that the focus of the development. The other things you want from the app can be included in future updates to the app.

When you receive a prototype or design proofs for approval, be sure to give feedback to the design teams as quickly as you can in order to minimise the downtime. You should also factor in approval time within the production plan and ensure there are other tasks which can be completed while waiting for approval on work.

Stick to the programme

As discussed previously, careful planning is critical to the successful delivery of an app. But a plan is no use to anybody if you don’t stick to it.

Every project we work on at AtomicMedia has a dedicated project manager and clearly allocated roles and responsibilities within the project to ensure everyone is aware of the expectations and that somebody is responsible for ensuring targets are met.

With 11 years of developing smartphone apps, AtomicMedia have learned that there has to be a solid balance between speed and overall quality. Our methods have been refined to ensure we are able to deliver on both.

If you would like to discuss your idea for an app, or if you have a problem for which an app might be the solution, talk to our team today and we’ll be happy to discuss it further. Look out next week for the next lesson.