10 lessons learned from a decade of building apps: Lesson 3 - Know your target 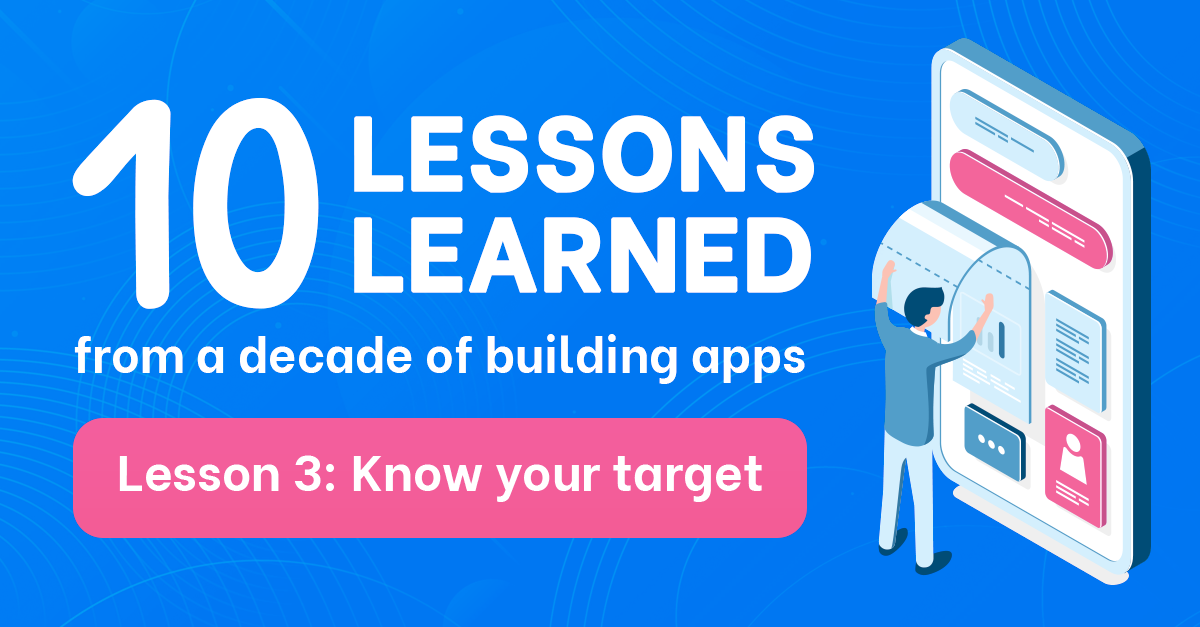 An easy trap to fall into when developing an app is to try and maximise your user base by reaching out to as many people as possible.

But every smartphone user is different, and just as trying to produce an app that will do everything will end up doing nothing terribly well, an app that targets everyone will end up pleasing nobody.

The worry, of course, is that by making your app too unique or too specialist, you’re limiting your potential audience to just a few people; but with nearly 2 billion people worldwide actively downloading smartphone apps, you only need to go after a tiny fraction to still have an impressive user base. So define your audience and make sure your app works for them.

Find your place in a crowded market

Smartphones have been around for a while now and there’s an app to do pretty much anything you can possibly think of, from checking your bank balance to ordering a pizza.

But that doesn’t mean every good idea is taken and you should just give up and go home. There is a very good chance that however good your idea is, there is already an app that is doing the same thing. However, by identifying your target market, you can improve on what already exists and take a chunk of the existing user base for that product.

Take, for example, dating apps. Online dating has exploded in the last ten years and even more so with the introduction of dating apps like Tinder and Plenty of Fish.

And yet, even with Tinder’s dominance, by targeting one particular subset of the user base, Bumble was able to carve out its own niche in the marketplace and become one of the most prominent dating apps with millions of active users. By identifying that a large number of female users of dating apps were becoming disillusioned after being inundated by nuisance messages from male users on the sites, Bumble changed the format slightly by introducing a new feature: women make the first move.

The rest of the format remained largely unchanged – you still swipe one way for people you like the look of and the other for people you don’t, but by putting women in the driving seat, Bumble is able to offer women a more enjoyable online dating experience and less pestering from male users of the app.

With any new app, you need to follow a similar premise: identify your target market and then figure out what your app can do for them that the available provision currently isn’t.

Your target market will also greatly affect the layout of your app. You need to understand who they are and what makes them tick in order to make the app work for them.

Take, for example, a prescription ordering service. You may wish to target a more elderly user base, which would mean having to be very careful about the design and layout of the app. With this particular audience, there is less assumed knowledge (for example most millennials are now pre-programmed to click on a burger menu icon) so the layout would need to be simplified enough that they don’t get lost using the app, but not so much that the user feels patronised.

However, this approach is unlikely to be appealing to younger users and so a fresh approach would be required in order to engage a different demographic.

Once you’ve identified your audience and made sure the app is working for them, you’ll start to build a dedicated and loyal fan-base for your app. This will allow you, if you wish, to monetise that audience in one of a number of ways.

The other way is through advertising.

With a specific, clearly defined user base, you’re offering a sound proposition to potential advertisers. Large companies are unable to free up the resource to drill down into a market as finely-honed as the audience you will have gained and so will be happy to advertise on your platform in order to reach a very specific target market.

At AtomicMedia, we’ve learned a lot in the 11 years we’ve been developing apps, and our team are only too happy to share our experience with you. If you have an idea for an app or would like to explore the development of an app for your business, we’d love to hear from you and share our expertise.